A Calvinist and an Arminian walk into a bar… 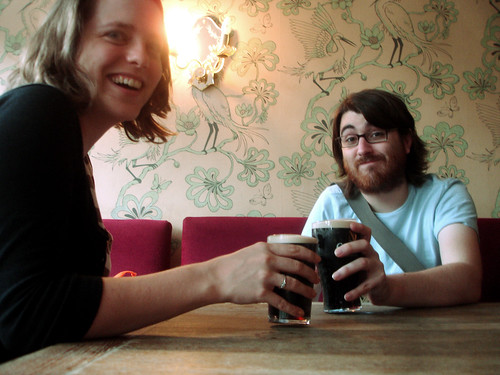 Roger Olson posted A Conversation between a Calvinist and an Arminian about God’s Sovereignty that we thought was dead on. In fact, we kind of wonder if Roger is bugging some of the conversations we’ve had. Déjà vu much? And since Roger has argued that Open Theism should be included under the broader umbrella of Arminianism, you can just substitute “Open Theist” where you see “Arminian” and it won’t make a bit of difference.

Here’s a snippet of the conversation from Roger’s post:

Arminian: “How does God love those he predestined, foreordained, to hell?”

Calvinist: “He gives them many temporal blessings.”

Arminian: “You mean he gives them a little bit of heaven to go to hell in.”

Calvinist: “Well, I wouldn’t put it that way.”

Calvinist: “That’s because you don’t understand God correctly. God is infinite and beyond our comprehension. So God’s love is not the same as our love. It transcends it.”

Arminian: “How is that different from saying God is ‘supercalifragilisticexpialadocious’?” Umberto Salvagnin via Compfight Oh oh. It’s getting ugly up in here. Frank Viola is suggesting that Greg needs to fix a nice tall glass of shut-up juice. He and Greg have decided to have a debate on the open view sometime this fall, and they have been engaging in some smack talk since that decision…

On Monday and Tuesday, Greg explained Molinism and contrasted it against the open view of the future. (Click here for part 1). Because many see the open view as a limited view of God, it’s helpful to be clear that this has less to do with the nature of God and is about the nature…

In this episode Greg discusses several passages in Isaiah that imply God’s foreknowledge is a primary differentiator between Isaiah’s God and all other gods. Links: Greg’s book: “God of the Possible“ http://traffic.libsyn.com/askgregboyd/Episode_0023.mp3