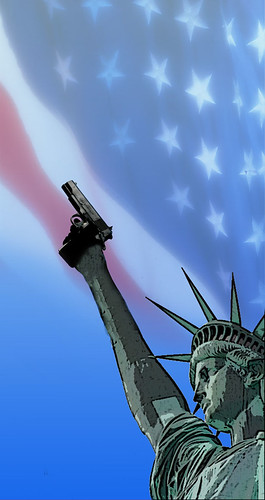 Since we’ve been reflecting on recent tragedies and the varying responses to them, we thought we would add this voice to the mix. This article from the New Yorker points out the differences in media coverage between the Aurora shootings and the shootings at the Sikh temple in Wisconsin.

Sadly, the media has ignored the universal elements of this story, distracted perhaps by the unfamiliar names and thick accents of the victims’ families. They present a narrative more reassuring to their viewers, one which rarely uses the word terrorism and which makes it clear that you have little to worry about if you’re not Sikh or Muslim. As a Sikh teaching at a Catholic university in the Midwest, I was both confused and offended by this framing. One need not be Pastor Niemöller to understand our shared loss, or to remember that a similar set of beliefs motivated Timothy McVeigh to kill a hundred and sixty-eight (mainly white) Americans in Oklahoma City.

Image by Alan Cleaver. Used in accordance with Creative Commons. Sourced via Flickr. Listen and Learn: A First Step Toward Reconciliation July 12, 2016 Rachel Held Evans invited Grace Biskie to reflect on racial reconciliation on her blog this week. Grace’s perspective is an important one to hear. Check out Church Stories: A Plea to Engage in Racial Reconciliation. From the article: The problem with disengaging is that it’s not what God intended for us. I believe God expressly… “However much evil was there, it would have been far worse if God was not there pushing back on it.” There is never a time when God is not present, no matter how bad the situation. In this short sermon clip, Greg Boyd talks about how we need to be watchful of the spirit world…