Not the God You Were Expecting 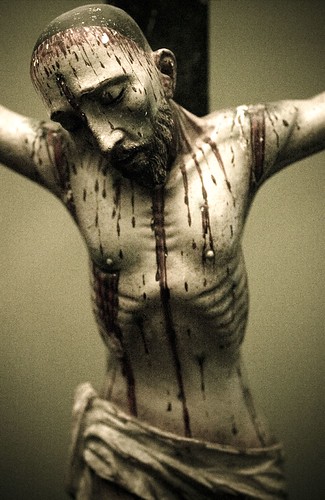 Micah J. Murray posted a reflection today titled The God Who Bleeds. In contrast to Mark Driscoll’s “Pride Fighter,” this God allowed himself to get beat up and killed while all his closest friends ran and hid and denied they even knew him. What kind of a God does this?

The kind worth loving.

You would expect a god to have a pride fighter’s tattoo carved into his leg. But Jesus’ feet were covered in dust from walking among us. You would expect a god to wield a sword in his hand, distributing vengeance on all his enemies. But Jesus’ hands healed his enemies who’d been wounded by the sword. For a moment it had seemed like he would be the god we had always imagined – overthrowing the Empire, leading a victory parade through the city streets, planting his flag in Jerusalem. Instead, He was betrayed with a kiss, arrested without a fight, and prosecuted without cause. Podcast: Should We Expose Santa and the Easter Bunny as Frauds to Our Kids? March 7, 2018

Greg pulls back the curtain on holiday fraud in this disenchanting roller coaster of an episode. http://traffic.libsyn.com/askgregboyd/Episode_0297.mp3