Responding to Driscoll’s “Is God a Pacifist?” Part I 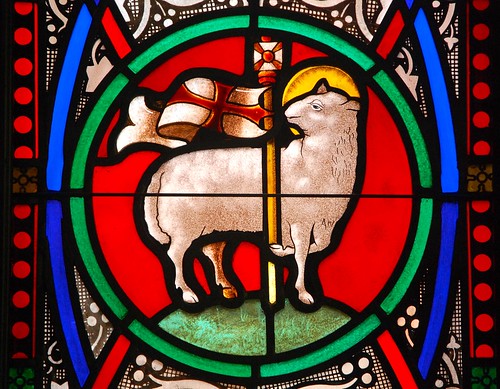 I’m sure many of you have read Mark Driscoll’s recent blog titled “Is God a Pacifist?” in which he argues against Christian pacifism. I’ve decided to address this in a series of three posts, not because I think Driscoll’s arguments are particularly noteworthy, but because it provides me with an opportunity to make a case against what I’ve come to see is probably the most common way that Christians try to get around the pacifist implications of Jesus’ (and the rest of the NT’s) teachings on loving enemies. It centers on the allegedly violent Jesus of the book of Revelation.

Driscoll begins by pointing out that some have used the sixth commandment – “thou shalt not kill” (Ex 20:13) — to “promote pacifism, an ideology that sometimes goes so far as to argue that no violence is ever justified.” (Note: pacifism isn’t an ideology that “sometimes” argues that violence is never justified: this is rather what “pacifism” means.) Against this, Driscoll cites some Hebrew scholars who argue that the word for “kill” in this passage is better translated “murder.” He then offers several other arguments to demonstrate that the Bible distinguishes between “killing” and “murder,” and he therefore concludes that the sixth commandment is “not intended to apply to lawful taking of life, such as self-defense, capital punishment, and just war.”

So far I actually have no qualms with Driscoll’ s argument. My problem is rather that I don’t see how any of this is relevant to the question of whether or not a follower of Jesus should think that “God is a pacifist.” After all, Jesus didn’t hesitate to place his teachings above various teachings of the OT, and the use of violence is a classic case in point. For example, at one point Jesus said, “You have heard it was said, ’Eye for eye, tooth for tooth.’ But I tell you, do not resist an evil person. If anyone slaps you on the right cheek, turn to them the other cheek also (Mt 5:38-9). Some have argued that Jesus is not repudiating Scripture, but merely human traditions, in his famous “but I say to you” teachings in Matthew 5. This is arguably true for all his other repudiations, but not for this one. The “eye for eye” command is given three times in the OT (Ex 21:24; Lev 24:19-20;Deut 19:21), and in both Leviticus and Deuteronomy, the instruction is not merely about violence that is permitted, as I’ve heard many argue, but about violence that is required.

In fact, this “eye for eye” principle is called the lex tallionis (law of retaliation), and it’s at the foundation of all the laws of the OT that require violence against perpetrators. Yet Jesus repudiates this principle and replaces it with his teaching to never “resist [anthistēmi] an evil person” (which, by the way, means that we aren’t to respond to aggression with aggression, not that we’re to do nothing).

What makes this even more amazing is that Jesus goes on to expound on his command on how to treat aggressors by saying,

I tell you, love your enemies and pray for those who persecute you, that you may be children of your Father in heaven. He causes his sun to rise on the evil and the good, and sends rain on the righteous and the unrighteous” (Mt 5:44-45, emphasis added; cf. Lk 6:29-36).

While the OT allowed for, and even required, retaliation, Jesus commands us to instead love and pray for our enemies. (In Luke 6 he adds “and do good to those who hate you” [vs 27]). Rather than to ever respond to violence with violence, we’re to instead love like the sun shines and like the rain falls – namely, indiscriminately. Whether the person is a friend or life-threatening enemy, we’re to love and bless them. And Jesus makes our willingness to love like this a precondition for being considered a child of our Father in heaven – “that you may be.”  By the standards of Jesus’ teaching, therefore, anyone who obeyed the OT laws requiring violence could not be considered a child of the Father in heaven.

It’s also important we notice that Jesus never qualifies who the “enemies” we’re to love are (nor does Paul in Rom 12:14-21). Indeed, his instruction to love indiscriminately rules out any possible qualifications. What makes Jesus’ teachings even more radical is that any talk about “enemies” to a Jewish audience in first century Palestine would immediate call to mind the Romans – the one’s who unjustly oppressed, abused, and often randomly killed the Jewish people. Jesus’ command to love enemies and to never respond violently to them thus includes the very worst kind of enemies we can imagine: the kind that threaten us, our country, and/or our loved ones. It includes the kind of enemies people naturally feel most “justified” killing, if they need to, in order to protect themselves. But these are precisely the kinds of enemies we’re to always love and never retaliate against.

As radical as this teaching might sound to us, however, I don’t believe it should surprise us that we’re commanded to love this way. For God loved us to the point of death when we “were yet enemies,” (Rom 5:10), and we are commanded to “imitate God” by living in this same kind of love, “just as Christ loved us and gave his life for us” (Eph. 5:1-2).

To sum it all up, in this passage Jesus is doing nothing less than telling us that our willingness to set aside a violent OT law in order to obey his new command to love and refrain from violence toward even the worst kind of life-threatening enemies is a precondition for being considered a child of God. And this, folks, is why I don’t believe Driscoll’s argument about the sixth commandment allowing for some forms of killing is relevant to followers of Jesus.

I am a bit puzzled as to why Driscoll didn’t address any of this material in his attempt to refute the idea that “God is a pacifist.” One might have thought it would be relevant since Driscoll is, after all, a Christian pastor, and he’s addressing a Christian audience.  Instead, to prove that “Jesus is not a pansy or a pacifist” (one wonders if the two are not synonymous for Driscoll), he cites one passage from the book of Revelation (14:14-20). To address this, I will offer some reflections on the nature of this book in my next post, and I’ll then conclude my response in a third post by addressing the specific passage Driscoll cites. Image by -Reji via Flickr Bless you all this Easter. He is risen! Has the Christmas story become so familiar that you’ve lost any sense of how spectacular it is? The great creator of the universe became a microscopic zygote. The all-powerful being who spoke the stars into existence came in a very small and vulnerable way. He crossed an infinite distance to become one of us. You can watch… Should a Christian Serve as a Military Chaplain? (podcast) July 4, 2019

Greg argues that both hot water and cold water are good.  Episode 530 http://traffic.libsyn.com/askgregboyd/Episode_0530.mp3 Why Vegetarianism Instead of Veganism? October 10, 2016

In this episode Greg talks about the Christian call to love our enemies–even Hitler. http://traffic.libsyn.com/askgregboyd/Episode_0007.mp3