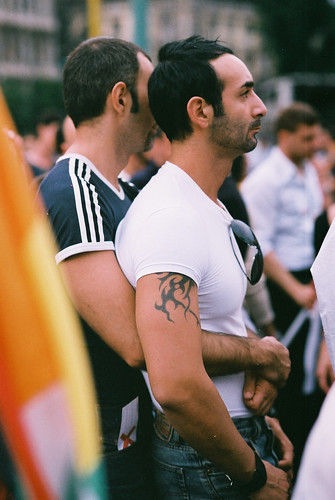 The first time I was aware of meeting a gay person, I was 18. I took a summer job waiting tables, and it turned out two of my coworkers were attracted to people of the same sex. One, a waiter in his 40s, fit every stereotype on Will and Grace. The other was a girl maybe five years older than me. She had model good looks, a sweet personality, and a girlfriend.

When I realized my coworkers were gay, my immediate reaction was worry. They’d find out I was a Christian sooner than later. Was I supposed to tell them the church I attended prohibited same-sex relationships? That seemed really awkward. But if I didn’t tell them, was I ashamed of my faith?

Every shift we were scheduled together, I was concerned about how I could both honor God and have good work relationships. But as one lunch rush led to another, I realized my coworkers weren’t particularly interested in my opinions.

They were interested in whether I’d help them when they were swamped.

They were interested in picking up a shift for me if I needed time off.

They were interested in being decent to their coworkers and giving their tables a nice experience at our restaurant and making good tips—just like me.

Scurrying to refill drinks, polishing silverware and sweeping floors, begging the cooks to hurry up on that new batch of bread, we were neighbors.

If I’d worked at that restaurant longer than a few months and had a chance to get to know those two better, the day may well have come to share my convictions. But for the time I was there, it was enough that they knew I was a Christian, and that a Christian could be their neighbor.

But “neighbor” isn’t a favored term of the culture wars, is it? Caught up in inflammatory rhetoric—in accusations of hate speech and sin, of immorality and inflexibility—it’s all too easy to see our cultural foils as anything but our neighbors. Yet whatever we decide about politics and the Bible’s teaching on these topics, “love thy neighbor” must be our main culture war tactic. Because even if they’re wrong on every issue, people on the other side of the culture wars are people Jesus died to save.

We have taken pleasure in the failings of our opponents and made the truth serve our purposes.

We have placed political victory above forbearance, trust, hope, and loyalty.

No matter what we believe the Bible says about these controversial issues, the simplest way to imitate Jesus’ approach is to do what he did: Intentionally get to know the people our society has deemed problematic or sinful. Learn their stories. Find out firsthand what helps them, what gets them interested in church and what sends them running out the door. Do less talking, more listening, and even more just being normal people together.

Personally, I was never interested in more than a knee-jerk, negative reaction to same-sex relationships before I met anyone who was gay. The Bible seemed pretty straightforward, and the whole thing wasn’t my problem—so why bother? But that’s the thing about loving your neighbor as yourself: If we really take the “as yourself” part seriously, their problems become our problems.

If we’re willing to eat, to work, to pray with our culture war neighbors instead of against them, half the war’s already won.

Bonnie Kristian is a writer and editor who lives with her husband in the Twin Cities. She is a graduate student at Bethel Seminary, and more of her work may be found at www.bonniekristian.com. This essay is adapted from her forthcoming book, Love God. Love People. Love Liberty. This week we’ve been looking at various aspects of what it means to be the church. Today, I want to address the paradox of how the church can be both beautiful and ugly at the same time. Jesus came into our fractured world to manifest the beauty of God’s reign and revolt against the evil…

H. Raab via Compfight If you want to read something today that is beautiful and challenging and unsettling, read this. D. L. Mayfield moved a couple of years ago with her husband and daughter from Portland to a diverse immigrant community in Minneapolis. They live a life of solidarity with the marginalized and oppressed. If you’re curious… Is Longing for Justice Inconsistent with Love? A Response to Paul Copan (#3) December 7, 2017

In a paper delivered at the Evangelical Theological Society in November, Paul Copan spent a good amount of time arguing that aspects of the NT conflict with the understanding of love that I espouse in Crucifixion of the Warrior God (CWG). For example, Copan cites the parable Jesus told in Luke 18:1-8 about a widow… Dan tries to expose Greg to some quality music. http://traffic.libsyn.com/askgregboyd/Episode_0187.mp3