Getting Behind the “Letter” of Violent Portraits of God 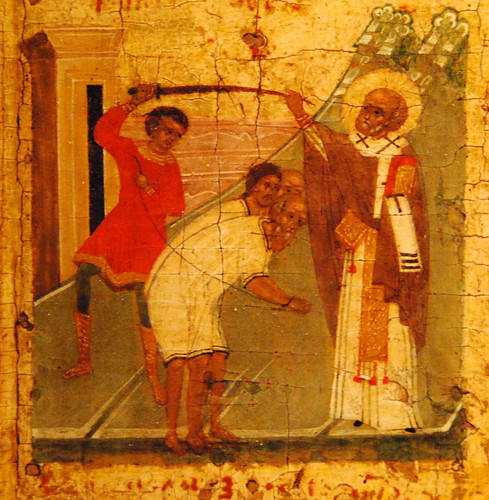 In my previous post I offered a brief review of Matthew Bates’ fascinating work, The Hermeneutics of the Apostolic Proclamation by Matthew Bates (Baylor University Press, 2012). Among other things, Bates demonstrates that for ancient people in general, and for Paul and the authors of the NT in particular, it was generally accepted that the most important meaning of texts that were divinely inspired was not what is found on the surface of the text, but what is found in the depth.  They were searching for “the voice behind the voice” (2) and the divine “res” beneath the “verba” of Scripture (173, 175,183). Bates’ contends that Paul and other early leaders of the Church had a shared kerygma that came with a built-in hermeneutic that guided them on how to do this – which for them uniformly meant finding Jesus throughout the OT (56-57, 331). And a major aspect of this “built-in hermeneutic” was something called “proposopological exegesis” – the widespread practice of positing a speaker and/or address in a text that is not present in the text itself. Hence, for example, we saw that Paul, followed by Justin Martyr, Barnabas and Irenaeus used “proposological exegesis” to discern the crucified Christ in Isaiah 65:1.

Beyond the relative merits of Bates’ proposal, it seems to me that his work, combined with the work of a multitude of other scholars, has significant implications for the way Christians today should approach the OT. Prior to the 17th and 18th century, the Church read Scripture through the lens of the “rule of faith” (regula fidei) and therefore with the understanding that the divine author of Scripture could intend meanings that went beyond, if not at time against, the original meaning intended by the human authors. And it was always assumed (though not always consistently practiced) that the central meaning of all Scripture is Jesus Christ, since Jesus himself taught us to read it this way (Jn. 5:39-45; Lk 24: 25-27, 32, 44-47). This is clearly in line with the probing way Paul and other NT authors approached the OT. They reflect very little concern with adhering to the original meaning of passages while demonstrating a willingness to go to remarkably creative extremes to discern Christ in Scripture.

With the advent of the historical-critical approach to Scripture in the 17th and 18th centuries, however, this “pre-critical” way of reading Scripture came to be largely disparaged, first in the academy and eventually in the Church.[1]  What’s most interesting today is that, while a host of scholars after Barth, and especially over the last twenty years, have been arguing for a return to the Church’s traditional way of reading Scripture, evangelicals have by and large been the most resistant to this.[2]  While evangelicals by and large reject the biblical criticism that accompanies the historical-critical approach to Scripture, they have been the most vocal defenders of the historical-critical assumption that the original meaning of a passage is the only truly legitimate meaning a passage can have.

A concern that drives many evangelicals is that Scripture will be transformed into a proverbial “wax nose” that can be made to mean anything we want if we depart from the original intended meaning as the primary focus of our exegesis.[3]  This is a valid concern in the face of radical post-modern approaches that completely do away with the quest for the author’s original intended meaning.[4] I thus agree that we should never “cut the tether” with authorial intent. At the same time, in light of the precedent set by Paul and the NT as a whole regarding the creative extremes they were willing to go to disclose how Scripture points to Christ, I can’t see how we can accept the historical –critical noose that restricts all legitimate meaning to the author’s original intended meaning. I concur with Daniel Teier who astutely notes that it “seems odd to suggest that we can receive the doctrines of the apostles without accepting the legitimacy of the scriptural hermeneutics by which they developed and defended that teaching.”[5]

To say that we should read Scripture looking beyond the surface meaning of the texts is not to transform Scripture into a “wax nose” by allowing people to read into Scripture whatever subjective preferences they wish. The traditional way of reading of Scripture was not an undisciplined reading: it was simply not a reading that was restricted to the surface meaning of passages. While willing to go beyond the author’s original meaning, the traditional way of reading Scripture was nevertheless governed by the conviction that our reading must always be submitted to the divine author of Scripture, the Holy Spirit, and to the community of all who confess Christ. Related to this, the traditional way of reading Scripture was also governed by the Church’s “rule of faith” and, especially in the early post-apostolic and Reformation periods, by the conviction that all Scripture bears witness to Christ. That is, whatever surplus of meaning (sensus plenoir) interpreters found in Scripture had to be consistent with the foundational ecumenical creeds and with the revelation of God in Christ.

While an increasing chorus of voices are now calling for a return to the traditional way of reading Scripture, what has not been done, to the best of my knowledge, is to demonstrate how this allows us to read all Scripture – including Scripture’s violent portraits of God – as bearing witness to Christ. While theologians have been willing to go to remarkable extremes to reinterpret huge portions of Scripture so that it doesn’t conflict with certain metaphysical attributes of God as (mistakenly, in my opinion) construed in the classical tradition (esp. God’s immutability, atemporality and impassibility), little has been done to reinterpret Scripture to reconcile it with God’s moral attributes, as revealed in Christ. While Origen, Gregory of Nyssa and others were engaged in this reinterpretation project in the first four centuries of the church, it seems these violent portraits not only became unproblematic, but were actually viewed as advantageous, once the Church embraced the use of the sword with the Constantinian revolution in the fourth and fifth centuries.

Hence, at present, Bible interpreters have tended to respond to the OT’s violent portraits in one of two ways, neither of which involves attempt to reinterpret them in the light of Christ. Scholars either say we must simply accept the surface meaning of portraits of God engaging in and sanctioning violence, doing the best we can to explain away the apparent monstrous qualities of these portraits, or we must simply dismiss these portraits and the narratives they are part of as non-historical.[6]  In my forthcoming book, The Crucifixion of the Warrior God, I will argue that the first option compromises the NT presentation of Christ as the definitive revelation of God, while the second compromises the traditional doctrine of the “plenary inspiration of Scripture” that is grounded in the testimony of Jesus, the authors of the NT as well as the Church throughout history.

Bates demonstrated that for Paul, “the letter kills when it is not accompanied by an understanding of the deeper divine intent behind the meaning of the letter” (333). If ever this applies, I submit that it is with the OT’s depictions of God as (for example) commanding genocide (e.g. Deut. 7:2), causing parents and children to cannibalize one another (Jer. 19:7,9; Lam.2:20; Ezek 5:9-10; Lcf. Lev. 26:28-29) or smashing parents and children together (Jer. 13:14). The effect these portraits have had throughout history and yet today in compromising the beauty of the revelation of God in Christ and in motivating violence on the part of God’s people has reflected this “letter killing.”

I believe it is time, therefore, that we apply the precedent of creative interpretive freedom that Paul and other NT authors exercised in finding Christ throughout the OT to these horrendously violent portraits of God. It is time that we take the project of reconciling all Scripture to the moral attributes of God revealed in Christ, and especially in the crucified Christ, as seriously as classical theologians have taken the project of reconciling all Scripture to a particular way of understanding God’s moral attributes, as revealed in Christ.

In my next post I’ll show that engaging in this project does not require us to engage in any new hermeneutical exercise.  It rather merely requires us to finally apply to these portraits interpretive practices that are anchored in the NT and that have been applied to other topics throughout Church history.

[3] On the “wax nose” dilemma, see the excellent discussion in N. Wolterstorff, Is Your Church Promoting Tribalism? April 24, 2014

It’s long been said that Sunday morning is the most segregated time of the week. Sadly, many have taught us that homogeneity is the way the church grows the fastest. But should we put up with this? In what follows, Greg lays out a biblical foundation for what he calls “reversing Babel.” According to the… The Entire Old Testament is About Jesus April 27, 2017

Jesus himself taught that he carried more authority than any prophet that predated him. Though Jesus regarded John as the greatest prophet up to himself (Matt 11:11), he claimed his own “testimony” was “weightier (megas) than that of John” (Jn. 5:36). Jesus certainly wasn’t denying John or any previous true prophet was divinely inspired. But…