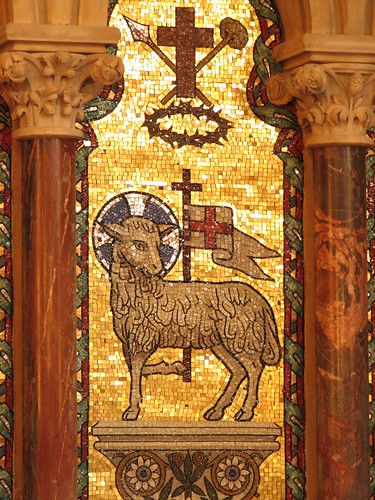 This is the last of a three-part response to Mark Driscoll’s post, “Is God a Pacifist?” We’ve seen that, to prove that Jesus was not “a pansy or a pacifist” (meaning that Jesus was okay with justified killing), Mark Driscoll skips over what Jesus actually taught and modeled in the Gospels and instead appeals to Jesus’ alleged violent behavior in Revelation. In Part I of my response to his argument, I demonstrated that Jesus calls disciples to unconditionally love enemies and to therefore refrain from violence against them. This, in fact, is a precondition for being considered “a child of your Father in heaven” (Mt 5:44-45). In Part II I demonstrated that in Revelation, John masterfully takes traditional violent imagery from the OT and other apocalyptic literature and turns it on its head, thereby reversing its meaning. What remains is for me to address the particular passage that Driscoll appeals to in support of his “pride fighter” Jesus: namely, Revelation 14:14-20. It goes as follows:

I looked, and there before me was a white cloud, and seated on the cloud was one like a son of man with a crown of gold on his head and a sharp sickle in his hand. Then another angel came out of the temple and called in a loud voice to him who was sitting on the cloud, “Take your sickle and reap, because the time to reap has come, for the harvest of the earth is ripe.”  So he who was seated on the cloud swung his sickle over the earth, and the earth was harvested.

Another angel came out of the temple in heaven, and he too had a sharp sickle. Still another angel, who had charge of the fire, came from the altar and called in a loud voice to him who had the sharp sickle, “Take your sharp sickle and gather the clusters of grapes from the earth’s vine, because its grapes are ripe.” The angel swung his sickle on the earth, gathered its grapes and threw them into the great winepress of God’s wrath. They were trampled in the winepress outside the city, and blood flowed out of the press, rising as high as the horses’ bridles for a distance of 1,600 stadia.

This image of the “great winepress of God’s wrath” is yet another one of those well-known violent images that John appropriates and transforms (cf. Isa 63:2-3; Lam 1:15; Joel 3:13). It depicts Yahweh as a warrior who crushes his enemies under his feet the way a person crushes grapes in a winepress to make wine. The crushing of the grapes and the blood flowing out of the winepress are symbols of the warrior’s complete and total conquest of his opponents. In Isaiah 63 this gory image is fused with the imagery of the warrior soaked in the blood of his enemies, and in my previous post I noted how John reverses the violence of this image by depicting the Lamb being soaked in blood before he even goes into battle. By this means he is expressing the profound truth that the Lamb wages war not by shedding the blood of others, but by shedding his own blood on behalf of others. We’ll now see that John ingeniously reverses the violent meaning of the winepress imagery as well.

Why does Revelation 14 speak about the harvest being ready? The answer becomes apparent when we compare this passage with Revelation 6:10-11. Here we find that the time for God’s judgment was reached, and the cry of the martyred saints for God to vindicate himself and them was finally answered, when “the full number of their fellow servants and brothers and sisters were killed, just as they had been.” This is precisely what John is communicating when he proclaims that the “grapes” were ready to be “harvested.” And the judgment of those who had martyred them takes place when they are made to drink the blood of their innocent victims, a ghoulish image that conveys the truth that the wicked must now ingest “the murderous consequences of [their] wicked life…”[2]  As happens throughout Revelation (and, in fact, throughout the whole Bible), the wicked are judged when God allows the consequences of their wickedness and violence to ricochet back on them (e.g. Rev. 11.18; 13:10; 16.6; 18.6; 22.18-19).[3] Indeed, the self-destructive nature of sin is ingeniously captured by John in the ironic fact that the drinking of the blood of the martyrs is at one and the same time a symbol of the rebels’ sin (14:8; 17:6; 18:3) and a symbol of their judgment (14:10; 16:6). In other words, it communicates that, in the end, sinners are vanquished by the destruction that is inherent in their own sin. For God to judge sinners, therefore, he need do nothing more than withdraw his merciful protection and allow evil to run its self-destructive course.[4]

We gain one further insight into the winepress imagery if we look at how it is used in Revelation 19:15. As I discussed in my previous post, in this curious battle scene, the Lamb rides into battle soaked in his own blood, revealing that he fights by shedding his own blood, and he fights with a sword coming out of his mouth, revealing that he slays nations insofar as they are defined by “the deceiver” (Rev. 12:9, cf. 20:2-3, 7-8) by speaking God’s truth. We are then told that the Lamb “will rule them with an iron scepter” and that “He treads the winepress of the fury of the wrath of God Almighty” (vs. 13-15). What’s most interesting about this passage is that, while the “ruling” (or better, “shepherding,” poimainō) is in the future tense, his treading (pate) on grapes is in the present, matching it with the present tense of his use of the sword coming out of his mouth. This means that Christ’s treading on grapes doesn’t come after he smites deceived nations with his word of truth. He rather treads on grapes while he slays these deceived nations with truth.

In fact, I strongly suspect that these two symbols – viz. smiting nations with truth and treading on grapes in the winepress — denote one and the same activity. For the unrepentant nations to drink the blood of the Lamb’s followers whom they have slain is synonymous with these nations being slain with the word of truth. By suffering the death-consequences of their own evil, in other words, the nations are being freed from their deceptive trust in Babylon’s coercive power. And this is why these nations, once slain by truth, can now be shepherded by the Lamb. By ingeniously subverting the meaning of traditional violent images, John is proclaiming that the age-long cycle of escalating violence between nations, each deceived into thinking that the power of the sword can bring lasting peace, will finally come to an end.

In the end, all will embrace Jesus’ truth that those who live by the sword eventually die by the sword. As the nations under the deception of Satan are destroyed, their trust in the sword-power of Babylon is replaced with a trust in the power of the slain Lamb. Hence, “the kingdoms of the world have become the kingdom of the Lord and his Messiah”(Rev. 11:15). Freed from deception, these nations now come under the strong (“iron scepter”) shepherding of the Lamb’s loving rule (another great reversal of imagery! vs. 15). For this reason, these same smitten nations end up in the heavenly city! They now “walk by [the Lamb’s] light,” and “the kings of the earth” – repeatedly spoken of in evil terms throughout Revelation – now bring “the glory and honor of the nations” into the city (Rev. 21: 24, 26).

From this it should be clear that, when the Lamb and his followers overcome by shedding their own blood, by speaking the truth that only Lamb-power wins in the end, and by having enemies drink the blood of martyrs they killed, it’s not because their opponents have finally all been killed. It’s because their opponents have finally been redeemed. And even for those individuals who continue to resist the truth and embrace the lie, John tells us that the gates of the heavenly city are never shut (21:25).[5]

In light of all this, I trust it is clear that there is no basis to claim that Jesus in the book of Revelation is “a pride fighter with a tattoo running down his leg, a sword in his hand with a commitment to make someone bleed,” as Driscoll sadly claims. Rather, the Jesus that wins in the end is the same Jesus we find in the Gospels, and he wins in the end the same way he won in the Gospels: namely, by offering up his life on behalf of others. In fact, Revelation indicates that this present age will be brought to a close, and the new and everlasting age of the Lamb’s loving reign will begin, simply by having the victory that the cross has already achieved manifested throughout the cosmos. In that day it will be clear that those who have placed their trust in “pride fighter” power have bet on the wrong horse. In that day it will be clear to all – as it should already be clear to all followers of Jesus – that the power that overcomes is, in fact, the “pansy” and “pacifist” power that was perfectly displayed in the foolishness and weakness of the cross.

[3] See ibid., , 213, cf. 216).  In my forthcoming book, The Crucifixion of the Warrior God, I demonstrate that God used an “Aikido” strategy to defeat evil on the cross. That is, rather than acting violently, God wisely turned evil back on itself, causing it to self-destruct. Because Satan and other fallen powers couldn’t understand the love-motivated wisdom of God at work when Jesus came to earth, they foolishly orchestrated the crucifixion, thereby bringing about their own defeat [see e.g. I Cor. 2:6-8; Col. 2:14-15]). I contend that when we read Scripture through the lens of the cross, we can see that this is the way God always defeats evil. And this is precisely what Revelation reveals at every turn. Several others who discuss the self-destructive nature of evil in Revelation are S. K. Tonstad, Saving God’s Reputation: The Theological Function of Pistis Iesou in the Cosmic Narratives of Revelation (Edinburgh: T & T Clark), (passim, but esp.142); L. L Johns, The Lamb Christology of the Apocalypse of John, (Mohr Sieback : Tübingen, 2003), 190-1; R. Bauckham, The Theology of the Book of Revelation (Cambridge: Cambridge University Press, 1993), and S.Travis, Christ and the Judgment of God: The Limits of Divine Retribution in New Testament Thought  (Milton Keynes/Colorado Springs: Paternoster/ Hendrickson 2008), 297-98.

[5]  Some scholars argue that, despite all of his graphic imagery of God’s judgments, John ends up espousing universal salvation (at least for humans). Most, however, argue that there is an unresolved (and probably intentional) tension in Revelation between depictions of those (humans and angelic beings) who are incorrigibly unrepentant being destroyed, on the one hand, and an at least hoped-for universal salvation, on the other. My own view is in this second camp.