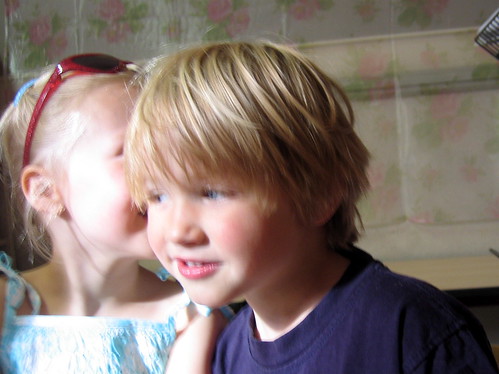 I’m convinced every child is full of theological wisdom that the fallen world tries to suffocate by the time they’re ten. As an illustration of this truth, I thought you might enjoy a discussion that my daughter Alisha overheard in children’s church this last week between Sage (Alisha’s five-year-old daughter and my granddaughter) and her life-long friend Lincoln (the four-year-old grandson of Terri Churchill, our ReKnew Editor).

To set the context, it helps to know that, in their own adorable ways, Sage sometimes plays the role of a little Ms. Smarty Pants, while Lincoln can be as stubborn as a mule when standing his ground in an argument. You should also know that, as will become clear in a moment, Lincoln is really into building things and thus thinks like an engineer.

The topic of discussion was, “How God created us.”

Lincoln: “No, God didn’t create me, cuz my mom built me.”

Sage: “Well, God and your mom created you!”

Lincoln: “No, only my mom built me — in the doctor’s office.”

Sage: “ No, God created you but you came out of your mom’s tummy, so she kinda created you too.”

Lincoln: “Well, then God was in the doctor’s office cuz that’s where my mom built me.”

Sage: “No, God wasn’t in the doctor’s office! Well…I guess he was kinda, since he’s everywhere, but not really.”

Though they probably didn’t realize it, these two blossoming theologians were touching on two of the most notoriously challenging theological issues thinkers have wrestled with throughout history. They were toiling over the ontological implications of the concept of a Creator God who creates by means of physical processes that nevertheless play a genuine ontological role in bringing about what comes to pass. And these two theological protégés expressed the amazing intuition that this issue is inseparably connected to the challenging enigma of the sense in which God is, and is not, simultaneously in all places. (For example, how was God’s presence in Christ different than his presence in a rabbit turd?) Not bad for two kids who, so far as I know, have not yet cracked a tome of Barth!

The genius of these two little theologians aside, let us rejoice that little Lincoln, who began the debate with the atheistic assumption that only his mom “built” him in the doctor’s office, ended up rebuffing Sage’s hesitant acknowledgment of God’s omnipresence in that very office! And let us marvel at the amazing ability of a doting grandfather to over-interpret a happenstance conversation between his astounding granddaughter and her cute little friend than was actually there.

Keep smiling! The world needs it! Tags: Humor, Lighten Up, Thorn in the Flesh The Genesis 1 creation story has always left people with questions. The main one being: Is Genesis 1 a literal story of how God created our universe? In this sermon clip, Greg Boyd talks about how when he was young, he wrestled with this question as a Christian. In the full sermon, Greg presents three…