Does God Have a Dark Side? 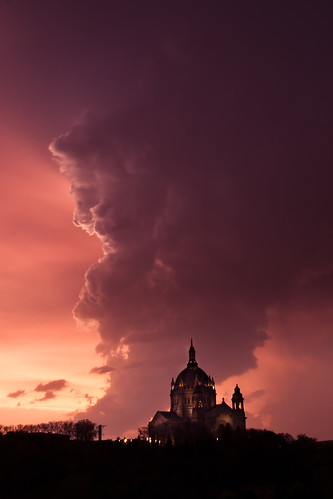 In the previous post, I argued that we ought to allow the incarnate and crucified Christ to redefine God for us rather than assume we know God ahead of time and then attempt to superimpose this understanding of God onto Christ. When we do this, I’ve argued, we arrive at the understanding that the essence of God— viz. what makes God God—is his unsurpassable, self-sacrificial, love. With Kreeft, I submit that all other attributes of God should be understood as expressions of this love, perceived and/or experienced from different angles. Hence, as Paul himself noted, God’s power and wisdom are simply expressions of the self-sacrificial love that is revealed in the crucified Christ. The cross is “the wisdom and the power of God”  (1 Cor 1:24).

As we also noted in the previous post, this conception of God is foolish and scandalous to many. And this, I believe, is why the scandal of the cross has often been minimized in the church’s theological tradition by being blended with pre-understandings of what God is like. That is, the cross was allowed to reveal one aspect of God, but it was not embraced as the definitive revelation of God’s very essence. Hence, rather than reinterpreting all biblical portraits through the lens of the cross, other canonical portraits were placed alongside the cross and granted equal authority to reveal God. The crucified Christ was thus embraced as revealing God’s loving and merciful side, but the portraits of God (say) sending the flood, commanding the extermination of the Canaanites or destroying Sodom and Gomorrah were said to reveal God’s “wrathful” side.

As a result, we’ve often been given a rather schizophrenic portrait of God: Jesus is loving, but the Father is terrifying. People who embrace something like this portrait continue to obediently profess that the Father “loves us,” but he “loves” in a mysterious way that is supposedly compatible with predestining multitudes to eternal fire as a way to bring him glory. He “loves” us, it is said, but in a mysterious way that is consistent with striking us or our loved ones down with cancer, a hurricane, or fatal accident if it fits his mysterious grand plan.

Reinhard Feldmeier and Hermann Spieckermann capture this point in relation to the “wrath of God” when they note that, while John proclaims that “God is love” (I Jn 4:8), “the contrary statement that … he is wrath, is inconceivable.” A cross-centered understanding of God rather suggests that there is a “clear asymmetry between wrath and love” such that if God “grows angry,” it is only “because of his love and for the sake of his love.” And for this reason, they conclude that “God’s wrath” must be understood as “his reaction to injustice and defiance (see Rom 1:18), and not a divine affect, not one of God’s dark sides, and certainly not a divine attribute [in the sense that love is].[1]

If God’s eternal essence is cross-like love, then to experience God is to experience perfect love. If some experience God as fierce wrath, therefore, it is not because there is something else in God alongside his love, as if there were “two souls in God’s breasts,” as Feldmeier and Spieckermann put it.[2]  It is rather because this is the way their hardened hearts experience God’s love. We might say that “wrath” is what God’s love looks like to those who rebel against it. To all who will yield to it, God’s love is a fire that consumes all that is contrary to it and that therefore purifies people to increasingly reflect this love and to thus look like Jesus Christ (e.g. I Cor. 3:10-15).  To all who refuse this purification, however, God’s love only consumes, which is precisely why it is experienced as “wrath” (Heb 12:29).

In my view, if it is possible for rebels to arrive at the point that there is nothing about them that is not irrevocably hardened against God, God’s love will justly, and mercifully, completely consume them. To continue to hold hopelessly hardened rebels in existence would mean they would suffer hopeless, unending torment (as the traditional view of hell teaches). Their termination should thus be viewed as an act of merciful euthanasia. Yet, even this ultimate judgment would not alter the fact that the “wrath” these rebels experienced was not an attribute alongside of God’s love, but was rather simply the way these rebels experienced God’s love.

On the other hand, some argue that the NT gives us grounds for hoping that the Creator is able to hardwire an irrevocable potential to respond positively to God’s love into the constitution of created beings. If so, then it’s my conviction that God would continue to try to turn these rebels around with his purifying love, giving us the hope that someday all God’s creatures might be reconciled to him (see e.g. Ac 3:21; Rom 5:18; 1 Cor 15:22; Col. 1:20). Yet, if one believes that love must be freely chosen, as I do, than this hope can never go beyond being a hope. And this in turn implies that hell— the experience of God’s love as “wrath”—is at least potentially unending.

I will confess that I am presently undecided as to which of these two positions is correct, though the biblical evidence inclines me to lean more toward the first than the second, but not so strongly that I can completely relinquish hope that the second is true. But the point of today’s post remains the same, regardless of which position one embraces: namely, that a cross-centered approach to understanding God leads to the conviction that all of God’s attributes are, in one form or another, expressions of the self-sacrificial love that defines his essence. “Why should we believe in God in the first place?” This was a question that Greg’s father asked of Greg. While there are many ways to respond, Greg’s offered what is called “the anthropological argument.” Here is an excerpt from Letters from a Skeptic. _____________________ My basic line of reasoning is this: We human beings…

Tags: Apologetics, God, Letters from a Skeptic
Topics: Apologetics
Do NOT follow this link or you will be banned from the site! Scroll To Top