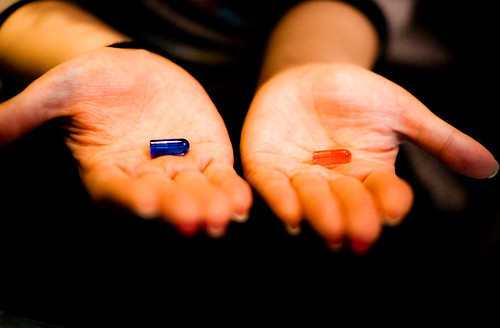 I will label the objection I’m about to raise “the great omission,” for my claim is that Molinists have inadvertently omitted from their consideration an entire category of truths that an omniscient God must know.

I grant the Molinist’s claim that God, being omniscient, must know the truth value of all meaningful propositions. And I grant that this means God eternally knows what will be true, insofar as the future is settled, and even what would be true in other circumstances, insofar as this is settled from all eternity. What Molinists systematically overlooked, however, is that, if God knows the truth value of propositions about what will come to pass, he must, by logically necessity, also know the truth value of propositions of what might and might not come to pass. Reflecting a bias toward determinism that has characterized the entire Christian tradition since Augustine, Molinists simply overlooked this category of propositions that God must know.

WARNING: this is about to get a little technical, at least for those readers who have not been trained in philosophy. Nevertheless, I encourage you to work through this slowly, even if you find it a bit difficult. I think you’ll find it worth the effort.

The Open View of the Future

Now, this of course doesn’t prove that our actual future is open (viz. expressed by true might and might not propositions). God could have created a world in which all “might and might not” statements are rendered false simply by creating a world that was defined exclusively by true propositions about what “will” and “will not” come to pass. But I think I’ve proven that it’s at least logically possible for God to create a world in which some “might and might not” propositions held true. So the matter of whether God created a cosmos with a partially open or an exhaustively settled future must be settled on other grounds.

It also proves that the claim that some “might and might not” propositions are true does not in any way qualify God’s omniscience. To the contrary, I would rather argue that those thinkers who assume God must know the future as an exhaustively settled reality and who thus deny the possibility that God can know the truth value of “might and might not” propositions are inadvertently restricting God’s omniscience!

The distinct claim of Open Theism is that we have biblical, experiential and philosophical reasons for believing that God did in fact create a world in which some “might and might not” propositions are true. Which is to say, he created a world in which the future is partially open, comprised of possibilities rather than settled facts. And God did this, in our view, precisely because he didn’t want to unilaterally determine all that comes to pass. (How boring that would be for God!) God rather wanted to populate this cosmos with free agents, thereby creating the possibility of genuine love, adventure, and yes, the risk of sin and evil.

* Greg Boyd, Satan and the Problem of Evil (IVP).

Category: Q&A
Tags: Determinism, Molinism, Open Theism, The Great Omission
Topics: Open Theism What it is and is not, Providence, Predestination and Free Will

“…this grace was given to us in Christ Jesus before the ages began, but it has now been revealed through the appearing of our Savior Christ Jesus…” Those who hold that the future is eternally settled and that God knows it as such sometimes argue that God had to foreknow who would believe in order… Podcast: What Does God Actually DO in the World? October 9, 2017

Greg discusses what a God, who takes his hands off of us, who gives up control for us, who accommodates for us, actually does in the world. http://traffic.libsyn.com/askgregboyd/Episode_0215.mp3

Free Will: Are studies that demonstrate genetic determinism a threat to free will? January 28, 2013

Greg shares his continuing thoughts on free will with a thought experiment (and a hand-drawn graph!) granting that we are largely determined by forces outside of our control. If we grant this presupposition, does that mean that free will is an illusion or insignificant? Find out! Tags: Calvinism, Determinism, Free Will, Open Theism
Topics: Free Will and the Future, Providence, Predestination and Free Will