Finger-Pointing and the Impulse to Judge 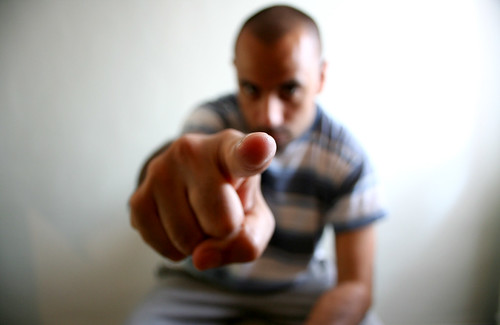 To no one’s surprise, yet to the sadness of many of us, several Christian spokespeople, including James Dobson, Mike Huckabee and Bryan Fischer, are blaming the shootings in Newtown, Conn, on abortion and gay marriage. This is sadly reminiscent of Jerry Falwell’s hurtful response to 9/11 when he divined that “the pagans,” “abortionists,” “feminists,” “gays,” “lesbians,” “ACLU” and “People For the American Way” were to be blamed. It’s reminiscent as well, on a smaller scale, of John Piper’s disturbing public declaration that the collapse of the 35W bridge here in Minneapolis that killed 13 people was God warning us about our sin and the toppling of a church steeple by a tornado was God warning a denomination not to ordain gays.

It seems to have become a staple of American conservative Christianity to respond to tragedy – when people most need to be reminded of God’s comforting and healing love – to grab a megaphone and accuse.

How very different is the posture that the NT teaches God’s people to have. When Jesus confronted people who claimed to discern the punishing hand of God in the face of tragedy, he rebuked them by telling them to worry about their own relationship with God (Lk. 13:1-5). He taught us to never look for specks in other people’s eyes, because we have planks sticking out of our own (Mt. 7:1-3). Whatever sin we think we discern in another person, in other words, we should regard it as a mere dust particle compared to our own plank.

Reflecting the same humble mindset, Paul taught us “a trustworthy saying that deserves full acceptance” by everybody: namely, that “Jesus came into the world to save sinners – of whom I am the worst” (1 Tim.1:15). Knowing that we are all sinners in desperate need of a savior, we should each confess that we are the worst of sinners. It would never occur to someone who took these teachings of Jesus and Paul seriously to ever try to put the blame for a tragedy – or even a damaged church steeple – on someone else’s sin!

I’m remind of Paul’s beautiful teaching that God “reconciled us to himself through Christ and gave us the ministry of reconciliation.” He then fleshes out what this means when he repeats: “God was reconciling the world to himself in Christ, not counting people’s sins against them, [a]nd he has given us the ministry of reconciliation” (2 Cor. 5:18-19). In other words, God handed over to us the wonderful assignment to manifest his love and saving work by never counting people’s sins against them! Our job is to do the exact opposite of what Satan, the Accuser (Rev. 12:9) does. From the garden, to Job, to the end of the age, he holds people’s sin against them and inspires to do the same. All who follow Jesus are called to engage in warfare against this enemy of humanity by manifesting the loving attitude of Jesus when he offered up his life to free all from their sin, praying for our forgiveness with his last breath (Lk 23:34).

I don’t doubt the sincerity of those who respond to tragedy by pointing fingers. But I want to, in love, warn them that in pointing fingers, they’re unwittingly aligning themselves on the side of the cosmic finger-pointer.

For my two cents, I’d much rather find myself on the side of the one who died to end all finger-pointing. Greg looks at the revelation of how God judges as demonstrated on the cross. http://traffic.libsyn.com/askgregboyd/Episode_0089.mp3 Should We Condemn Unbelievers For Their Own Good? October 30, 2014