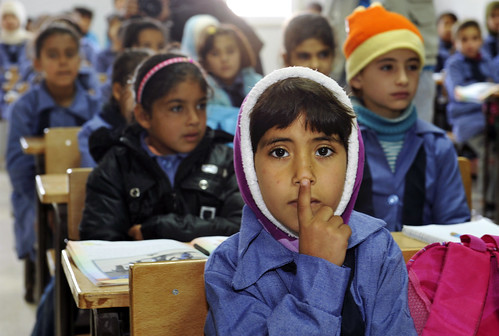 Yesterday I posted a response to Tyler Tully’s criticism of some of my thoughts on the Syrian crisis. The second blog I’d like to review is  Two Friars and a Fool by Aric Clark. Like Tully, Aric approved of much of what I said, but also like Tully, he raised several objections he felt I should consider.

First, Aric contends that I “understate the conflict between God’s Kingdom and governments.” He notes that it was the Roman government that put Jesus to death and that the “community which arose to follow Jesus didn’t understand itself as a club under the authority of Rome, but as a new society – an alternative to Rome. Proclaiming ‘Jesus is Lord’ means ‘Caesar is not.’”

In response, it is not clear to me why Aric thinks I underestimate the conflict between these two kingdoms. In fact, I agree with everything Aric said about this conflict. As I argue at length in The Myth of a Christian Religion (Zondervan, 2010), when Paul tells the Romans to “be subject” to government in Romans 13, it is not because they have any authority over us. Our only authority is Christ, and our only allegiance is to his kingdom. I rather believe Paul is instructing them to submit and pay taxes etc. because squabbling over these matters would encourage unnecessary persecution and distract us from our kingdom-building business as ambassadors of the kingdom of God. I thus agree with Aric when he claims, against me (he thinks), that “the type of obedience Paul urges is pragmatic, designed to help the community survive persecution, but it falls far short of allegiance.”  Amen!

Second, Aric seems to think he’s arguing against me when he stresses that “[h]uman government is founded on violence” and that “[t]he sword is not a tool that God has given to government, but its very nature.”  He further notes that Paul isn’t claiming that God approves of the sword-wielding activity of governments, only that “the government can and will use the sword to fatal effect.”  Perhaps I wasn’t clear, but this is the very view I was attempting to articulate in my post. Hence I said, “[t]his doesn’t mean that God wants governments to be violent. It just means that, since the governments of this fallen world are going to be violent, God is willing to get involved in them by “ordering” (tassō) their violence to bring about as much good as possible.” I’m not clear as to why Aric thought he was disagreeing with me on this point.

As a matter of fact, there were several other points where Aric thought he was arguing against my view by expressing the very view I advocate, but we finally come to a bona fide disagreement when Aric takes issue with my claim that Jesus-followers are to leave all vengeance to God, and that one of the ways God exacts vengeance is by orchestrating (tassō ) governments. Aric responds by saying, “Vengeance is God’s, yes, but God’s vengeance is against the nations, not wielded by them.” Then he adds, “moreover, we know what God’s vengeance looks like: it looks like Jesus forgiving the centurions from the cross. It looks like Jesus returning in peace to reconcile with his disciples. It looks like Jesus sending them out to bear his peace into all the world.”

If Aric is right, then I am definitely wrong – but I think it is Aric who is mistaken on this point.  For one thing, the word for “vengeance” (ekdikēsis ) means “to bring about justice by paying back.”  It is the opposite of forgiveness, and there is simply no way to construe it otherwise.  Related to this, if “vengeance” (ekdikēsis ) is the same as Jesus forgiving people and sending disciples out “to bear his peace into all the world,” as Aric clams, then how could Paul admonish Jesus-followers to “not take revenge (ekdikeō) …but leave room for God’s wrath,” reminding them of the Scripture that says “It is mine to avenge (ekdikēsis) ; I will replay” (Rom.12:19-20, cf. Duet.32:35)?  If “vengeance” is what Aric says it is, then we are putting it into practice by loving and serving our enemies. Yet, Paul forbids us to put vengeance into practice precisely so we will love and serve our enemies (Rom.12: 14-18).

Finally, I do not see how Aric can claim that God’s “vengeance is against the nations, not wielded by them.”  If “vengeance” is synonymous with forgiveness, then it’s not “against” anyone or anything. But more fundamentally, Paul explicitly states that governing authorities are supposed to be “God’s servants, agents of wrath to bring punishment (ekdikos) on the wrongdoer (Rom 13:4).  The Greek literally describes the one in authority as “an avenger (ekdikos) for wrath,” engaging in the very “avenging” activity that Paul had several verses earlier forbidden for Jesus followers.  This means that God’s “vengeance” is wielded by governments, as God influences their sword-wielding to bring about as much justice as possible. For this reason, I stand by my initial claim and conclude that Aric needs to rethink his understanding of God’s “vengeance.”

I’ll again reiterate that this doesn’t mean God approves of the violence that governments engage in. But since they are unfortunately predicated on violence, as Aric rightly notes, God is willing to get his hands dirty by influencing them in this or that direction, as much as possible, to minimize evil and bring about as much justice as possible. Yet, the most important point for Jesus-followers to get is that God is in these instances using government “bent on violence” to do things that he expressly forbids Jesus-followers to do. Our call is to put on display an alternative to all the kingdoms of this world by refusing all violence and laying down our lives for others – even, and especially, those who identify themselves as our enemies.

Live in his peace! The world is full of conflict where evil begets more evil. Violence produces more violence. Arguments produce more arguments. It’s a tit-for-tat world. What is God’s strategy for stopping this conflict? How does God respond to evil, and how does God call us to respond? This strategy might even come in handy during heated conversations…

Tom Lin via Compfight Glennon Doyle Melton is the voice behind Momastery. She is a brave, funny and challenging writer who has decided to tell the truth after years of drug and alcohol abuse and bulemia. Recently, Glennon has invited a series of men and women (including Rachel Held Evans, Jamie the Very Worst Missionary,… In the first three parts of this review of Scott Oliphint’s God with Us we’ve outline his attempt to reframe all God’s accommodations in Scripture in light of the Chalecedonian Creed. He, in essence, uses the mysterious union of God and humanity in Christ to justify asserting that the immutable God can really become mutable…