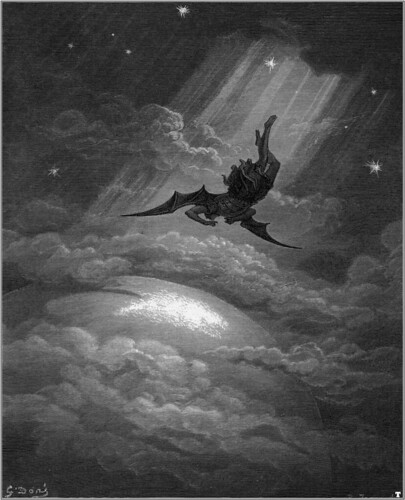 The Bible consistently proclaims that the creation reflects the glory of God. To me, the truth of this proclamation is undeniable. When I was younger I several times went on three-week solo backpacking trips into the mountainous forests of Montana. If gazing at the star studded sky on a moonless night at the peak of an 11,000 foot Montana mountain wouldn’t convince a person there’s a mind-bogglingly magnificent God behind this creation, I don’t know what would.

But the Bible and universal human experience also teach us that this “glory” isn’t the whole story.

That same God-glorifying starry sky looks down with indifference on terrified children sold into sexual slavery, war-torn countries, the ravages of disease, the aftermath of unimaginable natural disasters, and a planet that has known the incalculable suffering of events such the Holocaust and the genocide of Rwanda.

How can there be such a beautiful, nightmarish world? The biblical answer is that the world was created and is ultimately sustained by a beautiful God. But it has been seized and is now largely run by nightmarishly evil Powers.

A lot of people today, including a lot of Christians, find it hard to believe in things like Satan, rebellious angels and evil demons. And even some of those who say they believe in them feel awkward talking about them.

I empathize with this skepticism. Part of the reason for it, I suspect, is that we tend to think of Satan and demons as cartoon-like red entities with horns, hooves and pitchforks. These images are indeed mythic, borrowed mostly from pagan religions.

Nevertheless, while these images are mythic, there’s no reason to think that the evil realm they represent is mythic. The whole of the biblical narrative presupposes it’s real. Every aspect of Jesus’ ministry presupposes it’s real. Almost all people in all cultures throughout history have assumed this realm was real and often experienced it as real. And, in fact, there is a growing wealth of testimony from contemporary people, including a host of otherwise secular western anthropologists, that the supernatural realm is real, and that some of it is hostile.

I honestly don’t see how it is possible to explain how an all-good God could create a cosmos that is this screwed up without accepting that he’s opposed by forces of evil that operate on a cosmic scale. Appealing to human free will alone simply doesn’t cut it.

The world we live in looks like a war zone because the world we live in is a war zone. There is much that magnificently glorifies God, but there is also much that nightmarishly glorifies evil. An evil adversary and a rebel kingdom have seized the good creation. This adversary holds the earth and the humans who were supposed to rule it in bondage. Jesus came to change all this.

Jesus came to defeat the devil and end all his works (1 Jn 3:8; Heb 2:14). Through his life, ministry, death and resurrection he dealt a fatal blow to the powerful leader of the rebel regime and established a subversive revolution that he promised would ultimately end the enemy occupation and liberate the earth.

Since the time of Anselm (11th century), and especially since the Reformation in the 16th century, the tendency of the Western church has been to focus almost all of its attention on the anthropological dimension of the atonement, usually to the neglect of the cosmic dimension that is central to the NT. In the standard…

One major problem American Christians face is that we tend to embrace a magical view of the Christian faith. We assume that if a person “prays the sinners prayer,” “surrenders their life to Christ,” and “accepts Jesus as Lord of their life,” this somehow magically “saves” them and will sooner or later magically transform them… In our clip from this weeks sermon, Greg Boyd talks about how we respond to misfortunes and tragedies depends on how we frame them. In Colossians 3, Paul writes that Christ is all and is in all. When we frame our life within this understanding, we begin to see how we can live through misfortunes… To go along with our other post today, here’s a clip from Greg’s sermon last week. If you don’t have any financial margin in your life, this might have something to do with it. You can find the entire sermon here.

The Incarnation as an Example of Cross-Cultural Love December 18, 2013

Beautiful Faces of Palestine via Compfight Christena Cleveland wrote an excellent piece about the radical cross-cultural nature of the incarnation.  I’ve never thought of it quite this way before, but the incarnation is the most profound instance of entering into another culture in a selfless way. Moving outside of our “cultural comfort zone” to more…