How Should We Do Theology? 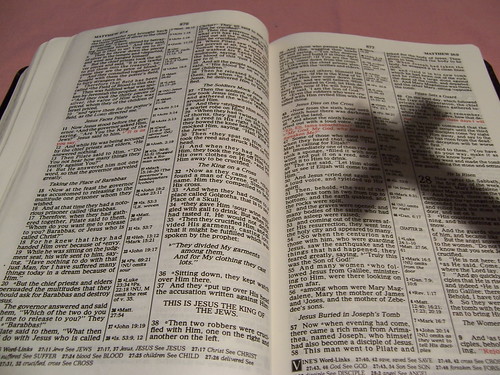 Delirious? via Compfight
In yesterday’s post, we introduced a way of talking about theology with the use of concentric circles. At the center, is the revelational of Jesus—most keenly revealed on the cross. The next circle is dogma, which includes the central tenants of the historic-orthodox church. The next is what is called “doctrine.” And the outer circle Greg calls theological opinion. (You can read yesterday’s post here.)
This leads us to consider how what Greg is saying relates to how we do theology as Evangelicals. A few years ago, Greg wrote the following and we have included it in its entirety below.
***

A central debate among evangelical theologians concerns the question of theological method. In other words, how should we “do” theology?

All evangelical Christians believe the Bible is God’s inspired revelation. Thus, evangelicals agree that Scripture must form the foundation for theological thought. But Scripture is not the only factor to consider when doing theology. Many evangelicals have adopted the Wesleyan quadrilateral (named after the eighteenth-century British revivalist and founder of Methodism, John Wesley) as a way to explain the various sources of theology and how they relate to each other. The quadrilateral, as the name suggests, presents theology as rooted in four sources: Scripture, Church tradition, reason, and experience. Scripture is viewed as the foundation of theology, with each of the other three aspects helping to clarify and interpret Scripture in a faithful manner for the purpose of doing theology.

The debate arises when the question is asked: How are we to balance the four aspects of the quadrilateral, and to what degree do tradition, reason, and experience shape and determine our understanding of the Bible? Although there is a spectrum of views on how to answer this question, two basic models can be described as follows.

According to the traditional evangelical model, the task of theology is to systematize and articulate the doctrinal truths found in the Bible. The emphasis is on the Bible as the unchanging, transcultural revelation of God. In the words of Carl F. H. Henry, “Divine revelation is the source of all truth, the truth of Christianity included…The task of Christian theology is to exhibit the content of biblical revelation as an orderly whole.” (C.Henry, God, Revelation, and Authority, vol. 1 [Waco: Word, 1976], 215). This view of the theological task is rooted in an understanding of the Bible known as propositionalism. For those who hold to a propositionalist understanding, the Bible is seen primarily as containing and offering information about God. In Henry’s words, “Scriptures contain a body of divinely given information actually expressed or capable of being expressed in propositions.”(Ibid., vol. 3, 457).

In contrast to the traditional view is the postfoundationalist evangelical model. Like other expressions of the postmodern perspective, the postfoundationalist approach emphasizes the culturally conditioned nature of all human intellectual enterprises—theology included. Simply put, the postfoundationalist method, while still recognizing the Bible as the primary theological norm, places greater emphasis on the way human reason and experience structure and shape any given theology. Stanley Grenz expresses this conviction when he writes that “the categories we employ in our theology are by necessity culturally and historically conditioned, and as theologians each of us is both ‘a child of the times’ and a communicator to those times.”(S. Grenz, Revisioning Evangelical Theology: A Fresh Agenda for the Twenty-first Century [IVP, 1993] 83).

While the fundamental Christian faith-commitment does not change, the conceptualization and articulation of this faith-commitment does change over time and across cultures. Thus, there is no expectation of ever arriving at a single evangelical “theology”; there will always be a number of diverse evangelical “theologies.” This is true both because God, the primary object of theology, is beyond any human system of thought, and because every human theological system will always be conditioned by its cultural context.

From a postfoundationalist perspective, the Bible is the inspired narrative of the saving acts and message of God. This means that the central locus of revelation is the narrative itself, not a set of propositions that can be distilled from and expressed outside of that narrative. The truths of God and his character are expressed in the unchanging story of Christian faith. A systematic theology, then, being necessarily and dramatically shaped by the components of human reason and experience, is always a culturally conditioned conceptualization and articulation of the implications of the unchanging biblical narrative for a particular people at a particular time and place.

For my part, I am convinced the traditional evangelical model of treating Scripture as a body of timeless truths is misguided. With the postfoundationalist camp, I see the Bible as an inspired narrative of God’s saving acts in history. But I am also wary of the postfoundationalist camp inasmuch as it can easily slip into a relativism that undermines the absoluteness of the truth claims of the Christian faith. Postfoundationalism can be interpreted to mean there is no foundation. In this case, people can never claim that the narrative (worldview) they choose to embrace and live by actually reflects the way things are. We can testify to the value the Christian story holds for us, but we cannot say it is more true than any other story.

I thus hold that Christian theology needs a foundation by which its truth claims can be anchored and assessed. Unlike the traditional evangelical model of Carl Henry, I do not see this foundation as being a body of revealed information. I rather see this foundation as being the historical witness to Jesus Christ as the definitive revelation of God. All theology is to be centered on Christ and epistemically anchored in historical considerations that ground the claim that he was, and is, the revelation of God to humanity. (On this, see P. Eddy and G. Boyd, The Jesus Legend [IVP, 2007]). The whole of the biblical narrative is centered on him and finds its legitimization in him. Is hell for real? Is it what we have been told it is? Does an all-loving God really torture people there forever? These are a few of the questions that Greg Boyd touches on in this weeks sermon clip. In the full sermon, Greg explores the fallacy of relativism, the singular truth of Jesus as… Lighten Up: The Unmerciful Servant September 11, 2015 I stole this from a reader’s Facebook page. (Thanks Kevin.) It’s good to remember that we don’t really have it all figured out.

Marc Nozell via Compfight Kurt Willems posted this excellent guide for reading the Book of Revelation as it was intended to be read. As Kurt points out, this is the most misunderstood and misinterpreted book of the Bible. If you were weaned on A Thief in the Night or the Left Behind series of books,… Image by e³°°° via Flickr Since I’ve been working on my own book dealing with the violent portraits of God in the Old Testament for the last eight and a half years, I was keenly interested in Derek Flood’s new book, Disarming Scripture: Cherry-Picking Liberals, Violence-Loving Conservatives, and Why We All Need To Learn to Read…