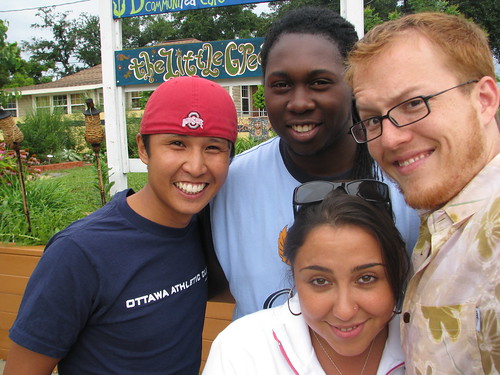 If you were to read an account today of a white man offering his front row seat on a public bus to an elderly African American lady, you’d probably think this was a nice gesture, but nothing more. However, if you learned that the event happened in Birmingham Alabama in 1955, you’d interpret this act in a very different way. You’d now understand that this act went far beyond being nice. This was an act of revolt against the dominant racism of the time.

In the same way, many today interpret Jesus’ behaviors as nice, when in fact, if you understand them in their original context, they were revolutionary. Nowhere is this more evident than in the way Jesus revolted against racial judgments in his day.

For example, most Jews of Jesus’ day despised Samaritans as racially impure and as heretics. They avoided any physical contact or interaction with them. Yet, Jesus went out of his way to interact with them. He had physical contact with them (even when they were leprous!) and ministered to their needs. And he treated them with great respect, even holding some out to be the heroes in his stories. For first century Jews, this was scandalous behavior.

Most remarkably, Jesus was willing to interact with, and lovingly minister to, Roman Centurions. A Centurion was a high ranking official in the Roman military that enforced Roman rule on Jews. No one would have been more despised by ordinary Jews than these people. Yet, Jesus went so far as to praise the faith of a Roman Centurion as greater than that of any Jew he had met! For most first century Jews, nothing could have been more offensive.

Understood in its original context, Jesus wasn’t merely “nice” to non-Jewish people. Rather, his interaction with other ethnic groups was revolutionary. His life was a prolonged revolt against the racism of his day. And in this way Jesus was revealing an aspect of what it looks like when God reigns on the earth while revolting against the Powers that fuel all forms of racial hostility and oppression. Jesus’ life reveals that where God’s Kingdom is present, all racial judgments and barriers are overcome and all people are treated as equals.

Now, my experience has been that most American Christians today – especially (to be frank) most white American Christians (of whom I’m a card carrying member) – think of “racial reconciliation” as at best a nice addendum to the Gospel. At worst, some think of it as “a liberal sell-out to political correctness,” as one person once told me.

It really is that serious!

But lets get honest. How many of our churches in America are as passionate about proclaiming and working toward racial reconciliation as they are about proclaiming that Jesus died for the forgiveness of sins? The answer, tragically, is relatively few. What makes this even more tragic is that, as is often pointed out, Sunday morning is the most segregated time in America. Fifty years after the Civil Rights Movement, the Church remains the least racially integrated institution in the country! In other words, the broader secular cultural does a better job of reflecting the coming Kingdom than we Christians do!

Some try to minimize the tragedy of this fact by claiming that its just “natural” for people from different cultures to worship with their own people. In fact, some leading church growth experts teach what’s called the “homogeneous unity church growth” principle, saying that the most effective way of building a church is to aim at building it around one people-group. They point out that it’s harder to get many people to join a church if it’s racially and culturally diverse.

Now, there’s no question that people are generally more comfortable worshiping with people who look, think and act like they do. And, therefore, I don’t doubt for a moment that shooting for homogeneity is a more efficient way of growing a church. But when did Jesus ever call us to be comfortable or encourage us to make non-believers comfortable in order to get them to accept the Gospel? And when did Jesus ever call us be worried about how to be efficient at growing large churches?

We are called to be faithful, not efficient. We are to manifest the “one new humanity” Jesus died to create – whether it makes people comfortable or not, and whether it increases or decreases the size of our congregations.

This is part of the Synchro blog for MennoNerds on Race.  Click here to watch a video on this topic.

Is Your Church Promoting Tribalism? April 24, 2014

It’s long been said that Sunday morning is the most segregated time of the week. Sadly, many have taught us that homogeneity is the way the church grows the fastest. But should we put up with this? In what follows, Greg lays out a biblical foundation for what he calls “reversing Babel.” According to the… When we think of Martin Luther King, we very frequently (with good reason) remember his I Have a Dream speech. But today, we want to remember a letter he wrote while jailed in Birmingham, Alabama, that seems sadly current. Let’s listen again today, and honestly examine what MLK has to say to us in 2015. Here… Greg offers wisdom for conscientious Christians who may be growing out of their church’s theological commitments.    http://traffic.libsyn.com/askgregboyd/Episode_0296.mp3 The church can only be the conduit of God’s love if it stops judging others (See yesterday’s post). This means that it will stop being concerned about its reputation in the eyes of those who practice this religious judgment. The only reputation we need be concerned with is to have the one Jesus had. He…