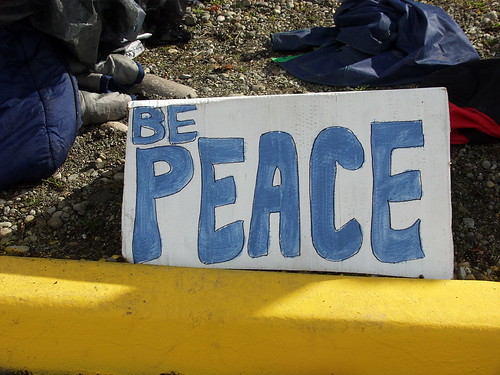 Though it seems to have been forgotten by many today, the cross wasn’t simply something God did for us. According to the NT, it was also an example God calls us to follow. Hence, after John defined love by pointing us to Jesus’ death on the cross on our behalf, he immediately added: “And we ought to lay down our lives for one another“ (1 Jn 3:16). This and a multitude of other passages make it evident that God’s will is for the cruciform love that defines his own, eternal, triune nature to be received by us and to transform us in order to flow through us so that this same love can transform and ultimately flow through others.

Paul makes the same point when he commands us to imitate (mimetai) the example given to us by God, in Christ, by walking “in the way of love, just as Christ loved us and gave himself up for us” (Eph. 5:1-2). Notice that for this author, to imitate God simply means one imitates and reflects the self-sacrificial love displayed on Calvary. According to Paul, the command to reflect this kind of love is to be placed “above” every other command.

Amazingly, there isn’t one exception clause to any of the NT’s instructions about loving and serving enemies or about the refusal to resort to violence in response to aggressors. To the contrary, far from allowing for “justified” exceptions, Jesus strongly emphasized that his followers were to love indiscriminately – the way God loves and blesses the just and unjust by causing his sun to shine and his rain to fall on everyone, without any regard to whether they did or didn’t deserve it.

Even more remarkably, Jesus went so far as to claim that loving enemies was a precondition for being considered a child of God. “[L]ove your enemies,” he taught, “that you may be children of your Father…” (Mt. 5:44-45). And again, “love your enemies, do good to them…Then your reward will be great, and you will be children of the Most High…” (Lk 6:35).

The logic behind Jesus’ astonishing teaching is that, since God’s nature is reflected in his indiscriminate, self-sacrificial, non-violent, servant love toward enemies – the kind of love that would soon be unambiguously displayed in Jesus’ crucifixion — then only those who replicated this kind of cruciform love in their own lives could be considered to look like this God, and in this sense be considered the children of this God.

In this light, it’s hardly coincidental that the definitive proof Jesus offered Pilate that his kingdom was “not of this world” was that, if his kingdom had been of this world, he says, “my servants would fight to prevent my arrest…” (Jn 18:36). Jesus remark to Pilate thus suggests that a distinctive characteristic of all who belong to his kingdom, and that distinguishes his kingdom from the kingdoms of this world, is that they do not fight, even when they would be considered justified to do so.

In this light, it should be clear that, contrary to the way most Christians today view the matter, the call to manifest God’s indiscriminate, self-sacrificial love and to unconditionally refrain from violence cannot be considered an optional aspect of what it means to follow Jesus. Rather, as cruciform love is the most definitive distinguishing characteristic of God’s nature, so manifesting cruciform love must be considered the sine qua non feature of all who are the children of this God. Traditional, classical theology has equated divine power with God causing and determining all things to exist. God supposedly acts on everything as their cause, but nothing in any way acts on him. Yet, these assumptions about how God causes things to exist starts in the wrong place. If we start with reason, it causes us… Love is the reason anything exists. God created the world out of love—to express his love and to invite others to share in his love. The central goal of creation is succinctly summed up in a profound prayer Jesus prayed just prior to his crucifixion: For [the disciples’] sake I sanctify myself, so that they…