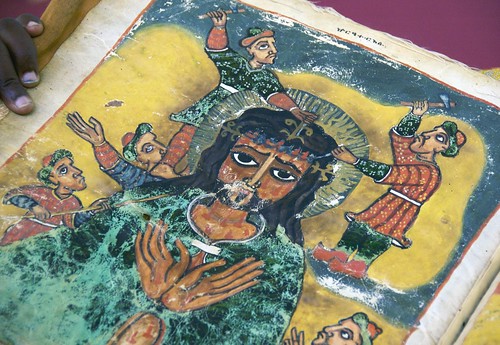 In the previous two blogs I noted that the vision of God in our minds is the single most important vision in our lives, for it completely determines whether we’ll have a relationship with God and what kind of relationship this will be. A. W. Tozer once wrote, “What comes into our minds when we think about God is the most important thing about us.” In another place he wrote, “The essence of idolatry is the entertainment of thoughts about God that are unworthy of him.” Truer words have not been spoken!

Some of the ideas that get thrown around about who God is—even, if not especially, in churches—can make you ask why we would want to worship and love such a God. I recently spoke with a young lady who is considering becoming a follower of Christ, and a friend advised her to listen to the podcast of a famous preacher (whom we shall leave unnamed). This man is known for preaching a macho-god of wrath and railing against “lovey-dovey” teachers who preach an “effeminate” and “diaper-wearing” picture of God who loves everyone. “If that was what God is like,” she said, “I couldn’t help but hate him.” I validated her intuitions and thanked her for her honesty. In place of this picture of God, I invited her to consider the portrait of God given to us in Christ.

One of the main reasons Jesus came into the world was to put to an end once-and-for-all to the deceptive pictures of God that Satan has oppressed the world with since the time of the first rebellion (Gen.3:1-5). He came to reveal what God is really like so we no longer have to guess what God is like on the basis of our own fallen reasoning and imaginations. This is the emphatic teaching of the New Testament, and everything hangs on our believing it!

For example, in the book of Hebrews we read:

In the past God spoke to our ancestors through the prophets at many times and in various ways, but in these last days he has spoken to us by his Son, whom he appointed heir of all things, and through whom also he made the universe. The Son is the radiance of God’s glory and the exact representation of his being, sustaining all things by his powerful word. (Hebrews 1:1-3)

In contrast to the Old Testament in which God spoke through the medium of prophets, in these last days (meaning, in this last stage of human history), God has spoken through his very own Son.  The revelation we get in Jesus Christ, in other words, is no longer mediated by others. Since the Son is himself God (Jn 1:1, 1:18), this revelation is one that God has given us in person.

So too, while we certainly can catch approximations of God’s character in the Old Testament, the Son alone is “the exact representation of God’s being.”  Only in Jesus do we learn exactly what God is like down to his very being. The word for “being” (hypostasis) denotes “essence.” So the author is saying that, while we can catch approximations of certain aspects of God in the Old Testament, in Jesus alone do we learn what God is like down to his very essence or his innermost heart.

In short, Jesus is God’s one and only true self-portrait.

I believe that the truthfulness of our mental picture of God, and therefore the quality of our relationship with God, hangs on our believing this. Jesus doesn’t simply reveal an aspect of God, as though there were aspects of God that were not Christ-like. Nor is Jesus simply one revelation to be set alongside all others, such as what we find in the Old Testament. Rather, as Jesus himself said to Philip, “If you see me, you see the Father. Why then do you ask, ‘show us the Father?” (Jn 14:8-9). To know what God is like, Jesus and the author of Hebrews is saying, don’t look anywhere else except to the Son.

The writer of Hebrews started his book on this fact and based everything he wrote in the next 13 chapters upon it. What did other New Testament writers have to say about this?  That is what we’ll discuss in our next post.

P.S. In my latest book, Benefit of the Doubt, I devoted Chapter 9, entitled “The Center of Scripture”, to this topic.

Here’s a sermon that you might find interesting. It’s one I gave a couple of years ago during the Christmas season.